Advances in molecular diagnostics are detecting more rare diseases at lower costs than ever before. For families with a history of genetic disease or for when de novo abnormalities are detected by screening, prenatal diagnosis gives the prospective parents and clinicians the information they need to choose the best prenatal and postnatal care. Definitive prenatal diagnosis relies on invasive techniques that carry a small risk of miscarriage. However, non-invasive techniques are emerging that may soon replace the traditional methods. 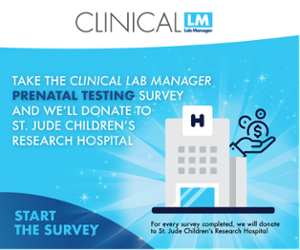 Diagnostic tests confirm a genetic disease with close to 100 percent accuracy. Until very recently, definitive prenatal diagnosis was only possible through invasive methods such as chorionic villus sampling (CVS) or amniocentesis (amniotic fluid analysis), which cause miscarriage in 0.2 and 0.1 percent of pregnancies, respectively. Recent advances in molecular analysis are now providing a repertoire of tests for detecting rare diseases from fetal DNA.

Screening tests, on the other hand, provide a risk score for birth abnormalities and identify pregnancies with an increased chance of (mainly chromosomal) diseases; therefore, screening tests can indicate if more accurate diagnostic tests are required.

Ultrasound imaging is the most common screening method, though accuracy depends on the skill of the sonographer. Major physical defects or aneuploidy can be assessed using this method, but not monogenic diseases like cystic fibrosis.

Improvements in PCR, microarray, sequencing, haplotyping, and other molecular methods are benefiting both the research into rare diseases and their detection via cffDNA-based non-invasive methods.

Scientists have recently developed targeted locus amplification to simplify haplotyping, making it more practical for diagnosis of inherited monogenic disease in fetuses. In other areas, chromosomal microarray technologies are revealing the pathology of microdeletions and microduplication; for example, the PrenaTest by the German company LifeCodexx uses quantitative PCR of cffDNA to detect the single microdeletion of chromosome 22 that leads to DiGeorges syndrome. The deletion occurs in one in 3,000 births and can cause learning difficulties, heart defects, and immunodeficiency.

Other research groups are focusing on increasing the cffDNA yield from maternal blood samples, thereby improving the reliability of NIDS. When the cffDNA fraction was enriched using agarose-gel size-selection, researchers found the positive predictive value, which indicates the reliability of a diagnostic test, improved by six percent compared to standard NIDS. Other strategies involve improving the stability of the fetal fraction in blood-collection tubes to maximize the cffDNA available for analysis.

Recent research has uncovered more characteristics that may further increase NIPS specificity, such as cffDNA fragment hypomethylation. However, not all mutations and abnormalities can be detected using NIPS; for instance, Fragile X syndrome, which affects cognitive abilities, is caused by 1,000 bp repeats that are not contained within the short cffDNA fragments.

The presence of intact fetal cells in maternal blood was discovered in the late 1960s. Since then, attempts have been made to exploit these cells for diagnosis, as they provide entire fetal genomes separate from the maternal DNA, rather than fragments. Unfortunately, these cells, most of which are nucleated red blood cells (nRBCs), trophoblasts, and leucocytes, are incredibly scarce at approximately one cell per milliliter of blood. This rarity and the lack of fetal-specific cell markers have delayed the technology. The following list includes just some of the research being conducted in the pursuit of developing feasible non-invasive fetal-cell diagnostic tests:

Rare diseases, as a whole, affect 25-30 million people in the U.S. Around 80 percent of rare diseases have a genetic origin, and the predisposition for a condition means family members are often keen for prenatal diagnosis. Diagnosis helps clinicians and parents plan treatment and care, and in a handful of cases, in utero treatment is available. However, sometimes the prospects for quality of life are so poor that termination is the better option. In all cases, early and accurate diagnosis is the key to the best possible outcome.

Implementation of rare disease diagnostics will depend on government initiatives, as well as biotech companies and clinical laboratories putting the health of people before economic gain. Constantly evolving NIPS methods, the emergence of fetal-cell based testing, and new ways of detecting rare genetic abnormalities mean expectant parents worldwide could soon benefit from accurate non-invasive prenatal diagnosis.