Cystic Fibrosis (CF) is a genetic disease with disabling clinical features. The hallmarks of the disorder include recurrent lung infections and chronic airway inflammation,1 which have a dramatic impact on patient morbidity and mortality.

CF is caused by mutations in the cystic fibrosis transmembrane conductance regulator (CFTR) gene.2 This molecular transport protein encodes a membrane protein within the chloride channel, known as the CFTR protein. The CFTR protein acts as a channel, transporting chloride ions in and out of cells.

Abnormalities in chloride ion transportation alter fluid movement across tissues and ultimately impact the production of thin, freely flowing mucus. For people with CF, this leads to dysfunction of both the internal lining of the respiratory and digestive systems (epithelium) and the lining of blood vessels (endothelium).

Despite recent therapeutic advances in targeted CFTR therapies, people with CF still experience recurrent chest infections, gastrointestinal disturbances, and reduced quality of life.3 There is an urgent need to study the complex interactions between epithelial, endothelial, and blood components in CF lung airways.

This hasn't proven easy; preclinical CF research has its challenges. One of the most significant hurdles is that CF's pathological features in animal models do not accurately represent those in humans.4 This mismatch has led to increasing demand for accurate preclinical research tools in CF—that's where organ-on-a-chip technology comes in.

What is organ-on-a-chip technology?

An organ-on-a-chip is a microfluidic cell culture device. It is created with microchip manufacturing methods and contains continuously perfused chambers that are inhabited by living cells. These are arranged in a way to simulate tissue- and organ-level physiology. This process allows for the analysis of organ-level lung pathophysiology in vitro. For example, this technology can determine whether established malaria drugs could help treat COVID-19.

Researchers have described these chips as representing “synthetic biology” at the organ level, where researchers can independently control and vary virtually any system parameter—such as the presence or absence of various cell types or the impact of potential treatments at the cellular level. In this way, researchers can observe and analyze human organ-level responses in real-time.5

The origins of microfluidic and organ-on-a-chip technology

Frustrated and uncomfortable with the use of animal models in cancer research, as a graduate student, Donald Ingber, MD, PhD, set out to develop better in vitro models as a postdoctoral fellow.

Now the founding director of the Wyss Institute for Biologically Inspired Engineering at Harvard University, Ingber is one of the leading pioneers in organ-on-a-chip technology.

"Things got interesting in about 1990 when I began collaborating with George Whitesides in chemistry at Harvard,” says Ingber. “He had just developed an inexpensive alternative way to manufacture computer microchips that adopted the photolithographic etching method (similar to the technique used by artists) currently used to pattern electrical circuitry on silicon microchips."

George Whitesides, PhD, used this novel technology to create a rubber stamp that retained surface topography down to nanometer resolution when stamping various materials. Together, Ingber and Whitesides created hollow channels in rubber stamps the size of a cell, launching the field of microfluidics and opening up ways to visualize and manipulate processes at the cellular level.

A few years later, Ingber and Whitesides created the microfluidic device known as “spleen-on-a-chip.”6 This initial simple organ chip did not contain cells. However, it functioned like a spleen in that it could remove pathogens from blood using magnetic particles. 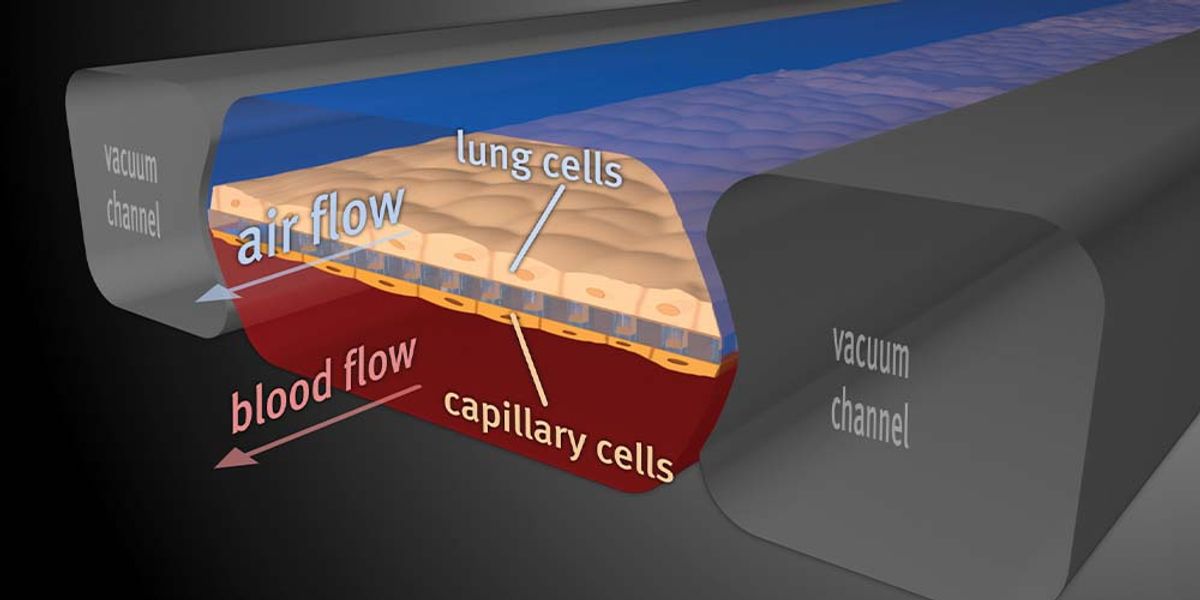 Human organ chips, like this Lung Airway Chip, are seeded with living human cells of various organ types and faithfully mimic many of the functions of whole human organs.
Wyss Institute at Harvard University

Around 2005, Shuichi Takayama, PhD, who worked with Ingber and Whitesides as a postdoctoral fellow, created the first “lung-on-a-chip.”7 It was a simple device containing a hollow channel the size of a small lung airway that, when liquids flowed through the channel, recreated sounds almost identical to what physicians hear through a stethoscope when listening to a patient’s lungs—but it had no cells. It was several years before Dongeun “Dan” Huh, PhD, one of Ingber’s graduate students at the time, created Lung Chip, the first living lung-on-a-chip with a tissue–tissue interface and breathing motions.8

Following the development of the Lung Chip, the Ingber lab created the first CF Airway Chip in 2020.9 Lined by primary human CF bronchial epithelial cells, the CF Lung Airway Chip recreates key features of human CF airways. As a result, the chip can mimic CF and may even provide a new drug screening tool for researchers.

As seen in CF airways disease, the chip shows higher ciliary activity and enhanced bacterial growth in mucus, features that have not been previously observed in in vitro cultures. The CF Chip also exhibits baseline inflammation and enhanced neutrophil recruitment, also commonly seen in the lungs of people with CF. 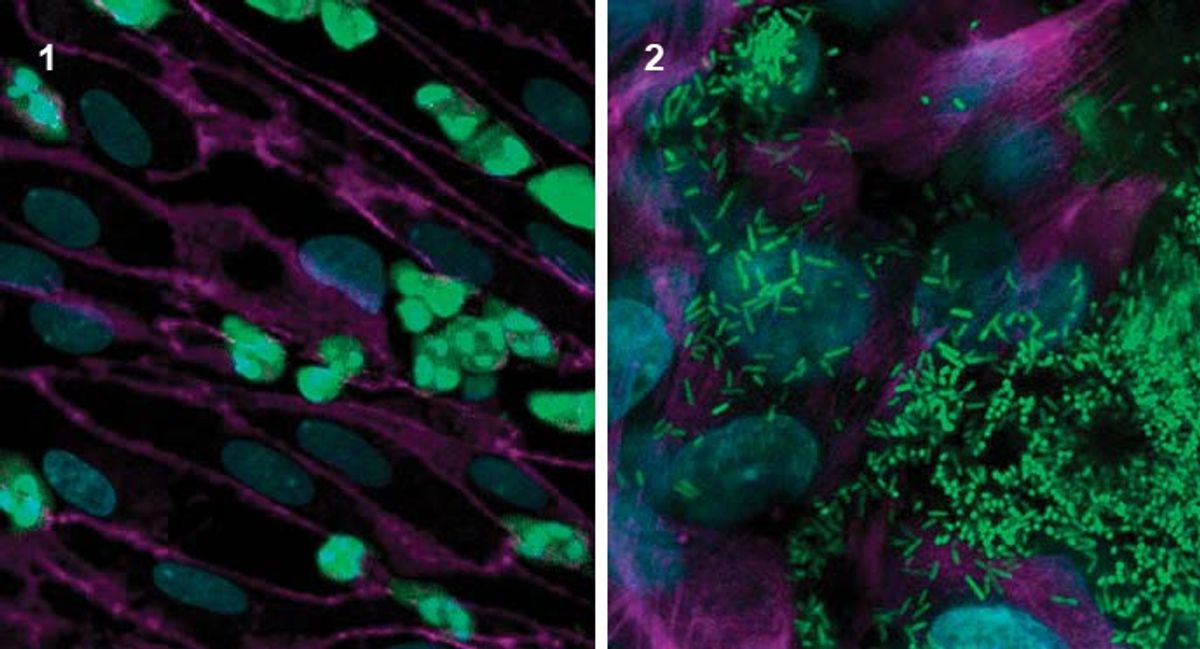 1. Neutrophils (green) added to the blood channel have attached themselves to the endothelium (magenta) and transmigrated to the epithelium in the parallel channel. 2. Pseudomonas aeruginosa (green), which causes infections in CF patients, grew on the secreted mucus layer of the CF Chip.
Wyss Institute at Harvard University

In particular, the researchers used the CF Chip to analyze the presence of the bacterial pathogen Pseudomonas aeruginosa. This pathogen frequently colonizes CF airways and is a significant cause of recurrent lung infections. Using fluorescence densitometric quantitation, Plebani and colleagues showed that CF Airway Chips had a higher number of bacteria than “healthy” chips, consistent with reported growths in humans. This finding demonstrates the CF Chip’s ability to replicate the CF airway’s microenvironment and its accompanying pathophysiology.

“My hope is that human CF Lung Airway Chips lined with cells isolated from CF patients can be used to develop new and more effective therapeutics for this disease,” says Ingber.

According to Ingber, this could be done with genetic subpopulations of CF patients who share common defects or exhibit similar clinical phenotypes. That way, a drug could be specifically designed for these subpopulations, and those very same patients could then be enrolled in smaller clinical trials to test the efficacy of the treatment.

"One could also envision developing individualized organ chips for each patient, perhaps including other organs that are involved in off-target toxicities of the drugs being explored,” he says. “This would allow physicians to identify the most effective and least toxic drug for that particular patient."

Organ-on-a-chip technology has the potential to revolutionize the treatment of this devastating disease. The knowledge gained from CF Airway Chips could be harnessed to better understand treatment options for people living with CF—potentially leading to an improved quality of life and increased lifespan.

The Ingber lab has now developed more than 10 different human organ chips, including a Lymphoid Follicle Chip to assess human vaccination response. They also recently used their Lung Alveolus Chip to identify drugs that could be repurposed to treat COVID-19.