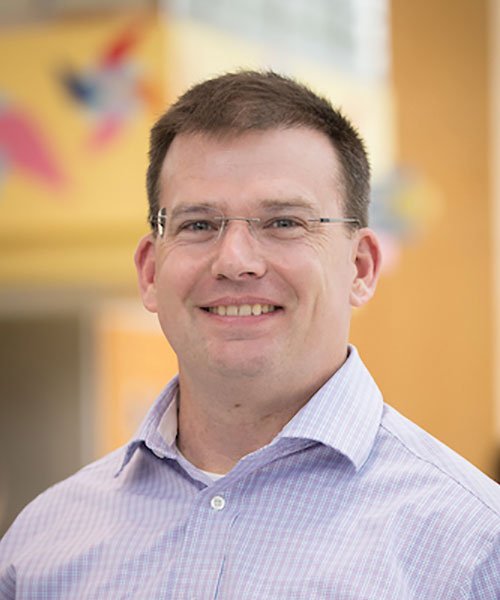 Matthew M. Laughon, MD, MPH is a professor at the University of North Carolina (UNC) at Chapel Hill in the department of pediatrics. He is also affiliated with UNC Health Care, where he specializes in neonatal and perinatal medicine. His research interests include neonatal epidemiology, neonatal clinical pharmacology trials (phase I, II, and III), and neonatal lung disease—particularly bronchopulmonary dysplasia. His research work integrates clinical efforts of neonatologists and pharmacologists from academic health care institutions across the US to determine efficacy of medications in pediatric populations. Dr. Laughon is using innovative
trial designs to overcome some of the barriers to performing clinical trials in neonatal populations, which have allowed him to successfully perform early phase trials in neonates in shorter times than traditional early phase studies. These innovations have been adopted by the pharmaceutical industry to study new drugs in development and to reduce timelines to approval. Dr. Laughon’s research team has also successfully participated and led trials under the Food and Drug  Administration’s guidance to determine the optimal dose for off-patent therapeutics in term and premature infants. His team also works extensively with the Pediatric Trials Network and the Neonatal Research Network.

Q: Can you tell me about your research involving clinical trials?

A: I am a neonatologist and most of the trials that I do are in the area of clinical pharmacology, mostly with infants, and mostly premature infants. The goal of our research is to try to find the safest and most effective doses of off-patent or off-label drugs. Most of the drugs used in the neonatal intensive care unit are off-patent or off-label, meaning that they are a different dose or a different indication or are in a different population than what’s listed on the FDA label. We study those drugs to try to gather more information that will improve the public health of these infants.

Q: What are the challenges involved in running clinical trials on neonates?

“Most of the drugs used in the neonatal intensive care unit are off-patent or off-label, meaning that they are a different dose or a different indication or are in a different population than what’s listed on the FDA label.”

A: There are a variety of challenges. One is that over the last 80 years, most drug development has focused on adults, and so there’s been a lack of expertise in the pediatric realm. That is being addressed by programs that are federally funded for training. Then there are other challenges because neonates have small blood volumes that are circulating in their body so the amount of blood that we’re able to take for measuring levels or concentrations of a drug is minimal, so we have to take very few samples with very low blood volumes. We’re addressing that by doing advanced pharmacokinetic (PK) modeling and advanced bioanalytical techniques to measure concentrations in low volumes of blood. Then there are educational and philosophical challenges at the site level, meaning that neonatologists are not used to enrolling in early phase drug studies, so they need some education and some encouragement. And then families don’t always understand the drug development process, particularly when it involves a placebo, so working with them to help them understand is also a challenge.

Q: Have you come up with any innovations in clinical trial design to help overcome some of the challenges?

A: Absolutely. One innovation is something we call opportunistic sampling, so that means that when we study drugs in the neonatal intensive care unit, we take advantage of the fact that these infants get lots of lab draws. We generally will leverage those lab draws for a PK sample as well so that we don’t do an extra stick just for the purposes of a PK sample. This is more appealing to families and to the neonatologists, so that’s good. The other thing we do around sampling is we can sometimes go down to the clinical lab and get samples from there that have already been processed for clinical labs, so those are labs that have already been done. Between opportunistic and lab samples that are left over, we are able to gather enough pharmacokinetic samples.

“We do a fair amount of heavy lifting at the beginning, before we start the study, to try to simplify the study as much as possible to make sure that the inclusion/exclusion criteria are as straightforward as possible.”

We also do a fair amount of heavy lifting at the beginning, before we start the study, to try to simplify the study as much as possible to make sure that the inclusion/exclusion criteria are as straightforward as possible. We also do a lot of site surveys to make sure that the sites that we are engaging with are active participants and excited about the study so that they can successfully enroll.

Q: Can any of these innovations also be applied to adult populations?

A: Yes, they can definitely apply to adult populations and the principles that we’ve worked on over the years can also be applied to any sort of special population or any population that is relatively uncommon or rare. For example, in the pediatric realm, there is something called ECMO or ECLS—extracorporeal life support. It’s a device that is placed by pediatric surgeons, usually in a pediatric intensive care unit, where the blood is removed from the body and there’s extra blood in the circuit, it’s oxygenated, and then it’s put back in the body. You can imagine if you’re giving a drug, IV for example, that drug distribution would be different because of the extra blood volume. It might be metabolized differently because it’s not pulsatile flow, it’s continuous flow, so you can imagine there might be some differences in drug concentrations, and in fact there are. That’s one area where we’re looking at pharmacokinetics, but this could be applied to adults who are on ECMO, which is rare, but it happens, or adults with other comorbidities. I’m not an adult physician so I don’t know all of the details, but my suspicion is that an adult who has renal problems or liver problems or has a liver transplant or kidney transplant may need different drug doses than an adult who has a fully functioning kidney or a fully functioning liver. So these principles could be applied and have been applied to adult populations.

Q: Are there any other elements that you can highlight that are helping you achieve success in your clinical trials?

A: We’re doing more patient engagement prior to starting studies so we can understand patients’ families and what they’re thinking about when it comes to research studies. We’ve done that several times and it really has been a very enlightening and elucidating process, which we’ve incorporated into the trial design so we can meet their needs. We’ve done some surveys, and we actually did an in-person patient engagement studio, where we had at UNC former families that had been part of our family advisory board come together face to face, and then we had some patients that currently had babies in the neonatal intensive care unit that also joined us to enrich the population. It was probably 60-70 percent mothers, 20-30 percent fathers, and I think we actually had one grandmother that was in the patient engagement studio where we talked about one of our upcoming studies, and it was awesome. They really were engaged in the work, they really helped us think about what we needed to do in terms of how to engage them, where to engage them, and the time frame. This is a very challenging time for them, while they’re in the neonatal intensive care unit baseline, and then with COVID, it just heightens the challenges because of the concerns about the neonatal intensive care unit, the concerns about themselves, the concerns about delivering during this time, or the fact that we can have very limited visitors. It was just a really great perspective that the research team got, and we’ll do it again before our next study.

Q: Is there anything you would like to add?

A: I would just like to thank the families for consenting to the studies that we do. They really are one of our active partners and they really help us drive the work that we do and help to move the field forward so that future children can benefit.

Regional Labs Get in the Clinical Trial Game