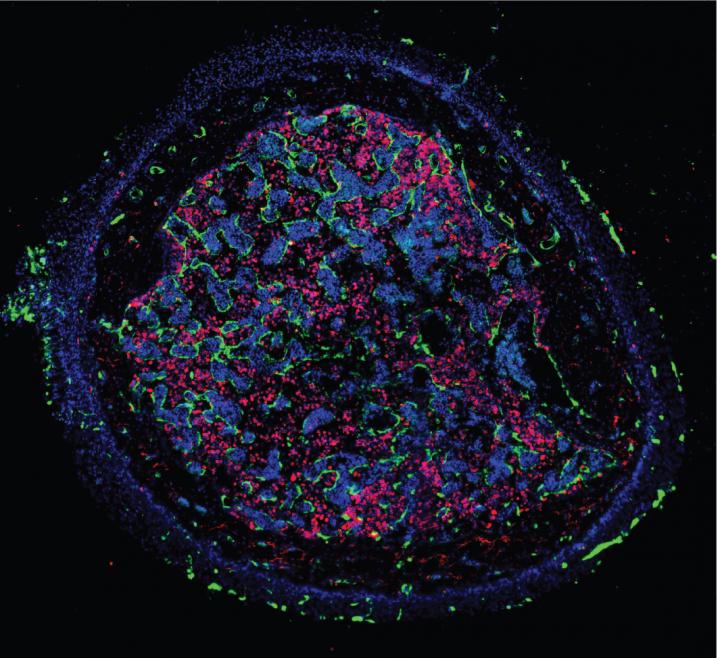 This is a cross section through the bone, showing the vascularization (green) and hematopoietic stem and progenitor cell (red) production from somitic origin.
credit: ©Sorbonne Université, credit: Thierry Jaffredo and Laurent Yvernogeau

Hematopoietic stem cells (HSCs) are responsible for the constant replenishment of all blood cells throughout life. One of the major challenges in regenerative medicine is to produce tailor-made HSCs to replace the defective ones in patients suffering from blood related diseases. This would circumvent the shortage of donor HSCs available for the clinic. To achieve the controlled production of bona fide HSCs in vitro, in a dish, a better understanding is required of where, when and how HSCs are physiologically produced in vivo, in the living body. Researchers from the groups of Catherine Robin (Hubrecht Institute) and Thierry Jaffredo (UPMC, LBD IBPS, Paris) have found a previously unappreciated hematopoietic wave taking place in the bone marrow of late fetuses and young adults and producing HSCs from resident hemogenic endothelial cells of somite origin. This transient hematopoietic wave fills the gap between the completion of embryonic blood production and the beginning of adult bone marrow hematopoietic production in both chicken and mice. The results of this research are published on the fourth of November in Nature Cell Biology.

The constant production of short-lived blood cells, needed for proper oxygenation of tissues and protection against pathogens throughout life, relies on a small cohort of HSCs. The first HSCs derive from specialized endothelial cells, named hemogenic endothelial (HE) cells, via an endothelial to hematopoietic transition (EHT). EHT transiently occurs in the main arteries, such as the aorta, during the embryonic development of vertebrates. The pool of HSCs is then amplified before migrating to the bone marrow where HSCs will reside during adult life. Whether EHT occurs past the embryonic stage and in other organs, such as the bone marrow, was unknown until now.

To find out whether EHT occurs past the embryonic stage and in the bone marrow, the researchers used a combination of experimental embryology, genetic, transcriptomic and functional approaches on chicken and mouse models. By tracing bone marrow-forming endothelial cells through fluorescent genetic labeling and live imaging analyses, they found that the entire vascular network of the bone marrow derives from the somites. The somites are segments of the body that will progressively form important tissues of the organism as the embryo develops, including bones, muscles, and skin. Unexpectedly, the researchers found that some somite-derived endothelial cells produce HSCs and multipotent progenitors in the late fetus and young adult bone marrow, through the same EHT process that was thus far only seen in the embryo. These cells are molecularly very similar to the cells undergoing EHT or recently emerged HSCs in the embryonic aorta, with a prominent Notch pathway, endothelial-specific genes and transcription factors involved in EHT. The results therefore demonstrate that HSCs are newly generated past embryonic stages, from hemogenic endothelial cells from somitic origin and via EHT, the same mechanism that occurs in the embryo.

The yolk sac of the embryo produces two partially overlapping waves of hematopoiesis. The first (primitive) wave gives rise to hematopoietic cells that last only during embryonic development. The second (definitive) wave produces various progenitors that migrate to the fetal liver to produce the immediate needed blood cells. These progenitors are sufficient for the embryo to survive until birth, when the aorta-derived HSC-dependent wave will take over. The transient hematopoietic production discovered in the present study fills the gap between the end of the yolk sac hematopoiesis and the bone marrow HSC-dependent production of blood cells. Indeed, the pool of HSCs that expanded in the fetal liver starts to colonize the bone marrow only just before birth. HSCs are present in very low numbers and time is most likely required before they find their final adult-type niches and start to differentiate/proliferate into more committed progenitors and mature blood cells. The transient hematopoietic wave that the researchers describe in late fetal and young adult stages might also prepare the bone marrow niches for the HSCs coming from the fetal liver.

Defects in HSCs lead to various blood-related disorders and cancers that are partly treated by HSC transplantations. The controlled production of bona fide HSCs from pluripotent precursors remains very difficult to achieve in vitro, in a petri dish, and therefore requires a better understanding of the HSC production as it occurs physiologically in vivo, in the living body. Identifying all steps of hematopoietic production and the molecular events controlling this process is of fundamental interest and should help to devise innovative stem cell therapies for hematopoietic disorders in the future.