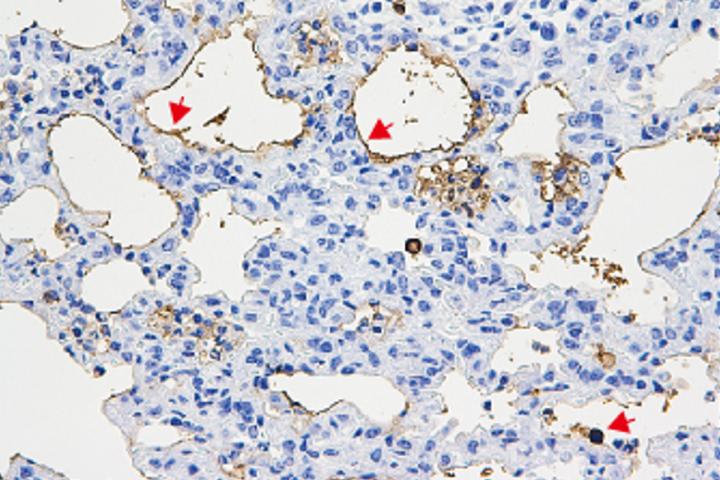 CHAMPAIGN, IL — A bacterial protein fragment instigates lung tissue death in pulmonary fibrosis, a mysterious disease affecting millions of people worldwide, according to a new study from researchers at the University of Illinois at Urbana-Champaign and Mie University in Japan.

"We discovered salt-loving bacteria in the lungs of patients with pulmonary fibrosis, and these bacteria secrete a peptide that marks the lung cells it touches for death," Cann said.

In people with pulmonary fibrosis, lung tissue becomes progressively more scarred and stiffened, with a prognosis of only three to five years of life after diagnosis. Certain environmental factors, infections or medications are linked to disease onset; however, the majority of cases are of unknown origin. These mysterious cases are called idiopathic pulmonary fibrosis. About 50,000 patients in the US die of IPF every year—more than die from breast cancer, according to the IPF Foundation.

The disease progresses slowly until a point when a patient experiences a rapid worsening of breathing and loss of lung function, a phase called acute exacerbation. Yet doctors do not know what triggers acute exacerbation in a stable patient.

Previous studies found that certain bacteria, such as strains of Halomonas, Staphylococcus, and Streptococcus, proliferate in the lungs of IPF patients, likely as a result of high amounts of salt in the lining of patients' lungs. The researchers wondered if the bacteria played a role in acute exacerbation, so they cultured bacteria associated with fibrotic lung tissue in a salty environment and studied what the bacteria secreted.

They found a small peptide, secreted by Staphylococcus nepalensis, that rapidly kills lung cells. They named the peptide corisin.

To confirm that corisin was the exacerbating culprit, Gabazza's group ran an experiment on mice with IPF. They compared mice given corisin itself, those infected with corisin-secreting Staphylococcus nepalensis, those infected with a Staph strain that did not secrete corisin, and an untreated control group. They found that the mice given corisin or the bacterium that secretes it showed much greater signs of acute exacerbation.

They also looked at lung tissue samples from human patients and found that those who had undergone acute exacerbation had higher levels of corisin in their lungs.

Cann's group then searched the genome of Staphylococcus nepalensis to figure out where corisin comes from. They found that it is a fragment cut from a larger protein. They tested the larger protein on lung tissue and found it did not have the destructive properties of the fragment.

"It's like a Trojan horse," Cann said. "Anybody trying to characterize the large protein to find what it does would never know it has this destructive element hidden inside it. The microbe makes the polypeptide and then it cuts out that small piece of it, the corisin, and that is very deadly."

Next, the researchers hope to identify the enzyme that cuts corisin out of its larger protein. They aim to create agents to block it—effectively bolting shut the door of the Trojan horse. They also plan to identify which other strains of bacteria produce corisin or similar peptides, and to study other types of fibrosis, such as in the kidneys and liver, to see if corisin or other bacterial agents play a role in those diseases.

"Knowing that a cause of the acute exacerbation is a bacteria-derived factor gives us a fightable enemy," Gabazza said. "On the patient side, this new discovery could mitigate the psychological stress of fighting against an 'unknown intruder,' while on the physician side, this can stimulate the development of strategies for treatment and drug discovery."

- This press release was originally published on the Illinois News Bureau