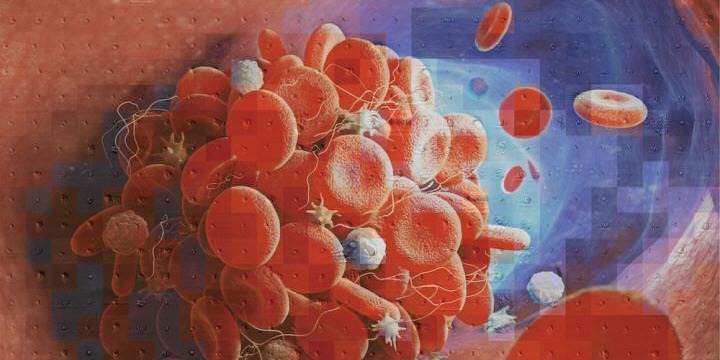 Mosaic of a blood clot created using the numerous platelet images acquired via the iPAC method.
Yuqi Zhou (CC BY 4.0)

A new tool using cutting-edge technology is able to distinguish different types of blood clots based on what caused them, according to a study published in eLife.

The tool could help physicians diagnose what caused a blood clot and help them select a treatment that targets cause to break it up. For example, it could help them determine if aspirin or another kind of anti-clotting drug would be the best choice for a person who has just had a heart attack or stroke.

Blood clots occur when small sticky blood cells called platelets cluster together. This can help stop bleeding after a cut, but it can also be harmful in causing a stroke or a heart attack by blocking a blood vessel. "Different types of blood clots are caused by different molecules, but they all look very similar," explains lead author Yuqi Zhou, a PhD student at the Department of Chemistry, University of Tokyo, Japan. "What's more, they are nearly impossible to tell apart using existing tools such as microscopes."

To develop a more effective approach to identifying different types of blood clots, Zhou and her colleagues took blood samples from a healthy individual and then exposed them to different clotting agents. The team captured thousands of images of the different types of clots using a technique called high-throughput imaging flow cytometry.

They next used a type of machine-learning technology called a convolutional neural network to train a computer to identify subtle differences in the shape of different types of clots caused by different molecules. They tested this tool on 25,000 clot images that the computer had never seen before and found it was also able to distinguish most of the clot types in the images.

Finally, they tested whether this new tool, which they named the intelligent platelet aggregate classifier (iPAC), can diagnose different clot types in human blood samples. They took blood samples from four healthy people, exposed them to different clotting agents, and showed that iPAC could tell the different types of clots apart.

"We showed that iPAC is a powerful tool for studying the underlying mechanism of clot formation," Zhou says. She adds that, given recent reports that COVID-19 causes blood clots, the technology could one day be used to better understand the mechanism behind these clots too, although much about the virus currently remains unknown.

"Using this new tool may uncover the characteristics of different types of clots that were previously unrecognized by humans, and enable the diagnosis of clots caused by combinations of clotting agents," says senior author Keisuke Goda, Professor at the Department of Chemistry, University of Tokyo. "Information about the causes of clots can help researchers and medical doctors evaluate the effectiveness of anti-clotting drugs and choose the right treatment, or combination of treatments, for a particular patient."

- This press release was originally published on the eLife website