An NTU-led team of scientists has developed a #diagnostictest? that can detect the virus that causes COVID-19 even after it mutates. Named the VaNGuard (Variant Nucleotide Guard) test and developed based on the CRISPR gene-editing tool, it can yield results within 30 minutes. The test could potentially be used in settings where it is important to detect the virus in individuals quickly.
NTU Singapore

A team of scientists led by Nanyang Technological University, Singapore (NTU Singapore) has developed a diagnostic test that can detect the virus that causes COVID-19 even after it has gone through mutations.

Called the VaNGuard (Variant Nucleotide Guard) test, it makes use of a gene-editing tool known as CRISPR, which is used widely in scientific research to alter DNA sequences and modify gene function in human cells under lab conditions, and more recently, in diagnostic applications.

Since viruses have the ability to evolve over time, a diagnostic test robust against potential mutations is a crucial tool for tracking and fighting the pandemic. Over its course so far, thousands of variants of SARS-CoV-2, the virus that causes COVID-19, have arisen, including some that have spread widely in the United Kingdom, South Africa, and Brazil.

However, the genetic sequence variations in new strains may impede the ability of some diagnostic tests to detect the virus, said NTU associate professor Tan Meng How, who led the study.

In addition to its ability to detect SARS-CoV-2 even when it mutates, the VaNGuard test can be used on crude patient samples in a clinical setting without the need for RNA purification, and yields results in 30 minutes. This is a third of the time required for the gold standard polymerase chain reaction (PCR) test, which requires purification of RNA in a lab facility.

The team of scientists led by NTU hopes that the VaNGuard test can be deployed in settings where quickly confirming COVID-19 status of individuals is paramount.

Tan, who is from NTU's School of Chemical and Biomedical Engineering, said: “Viruses are very smart. They can mutate, edit, or shuffle their genetic material, meaning diagnostic tests may fail to catch them. Hence, we spent considerable effort developing a robust and sensitive test that can catch the viruses even when they change their genetic sequences. In addition, frequent testing is essential for helping to break the transmission of viruses within populations, so we have developed our tests to be rapid and affordable, making them deployable in resource-poor settings.”

The findings were published in scientific journal Nature Communications on March 19, 2021.

The research team has filed a patent for the VaNGuard test.

Moving forward, they plan to perform further experiments to further refine their diagnostic kit, obtain regulatory approval from relevant authorities, and commercialize their test in partnership with diagnostic companies.

Using a pair of “molecular scissors” to detect virus 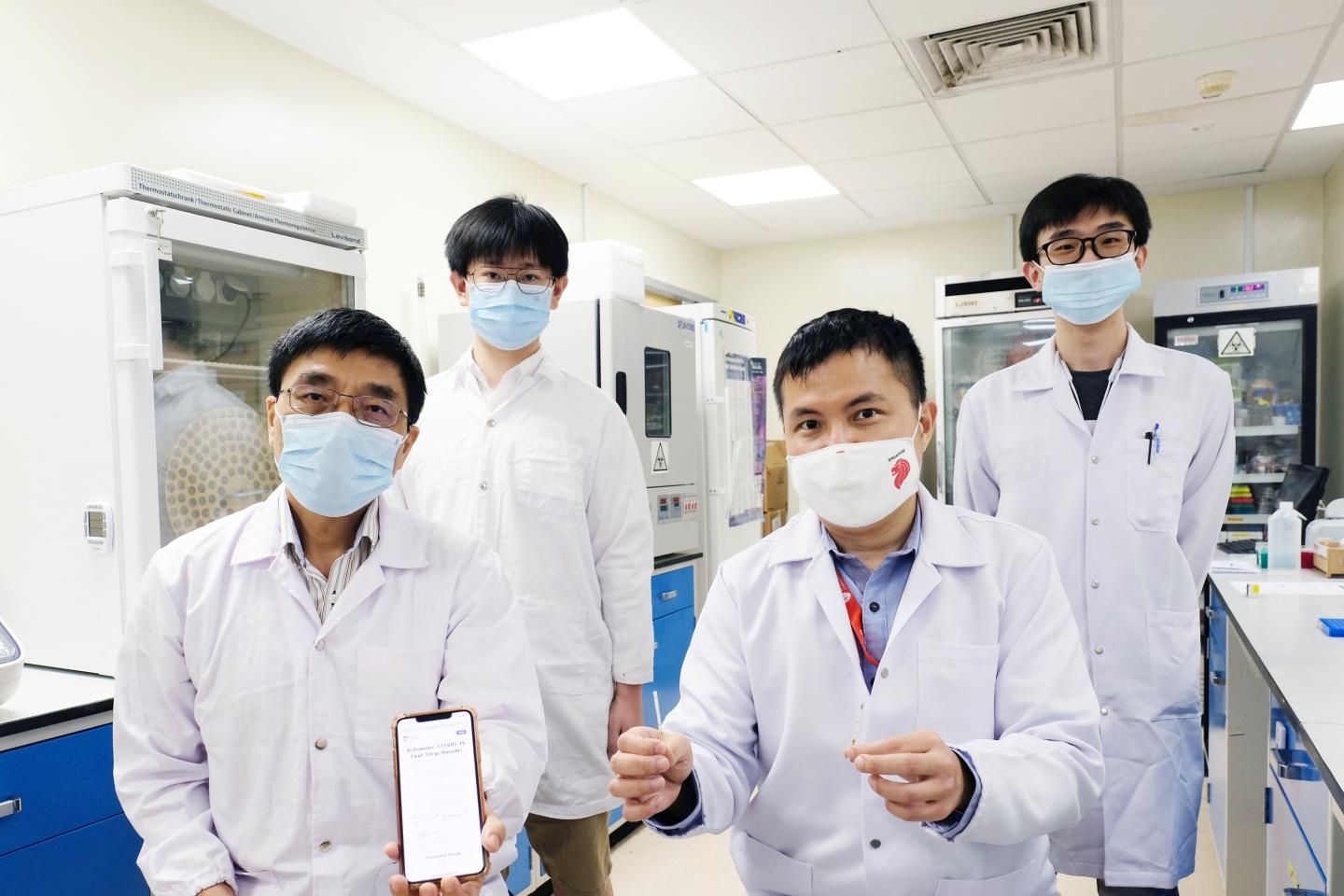 A team of scientists led by NTU Singapore has developed a diagnostic test that can detect SARS-CoV-2 - the virus that causes COVID-19 - even after it has gone through mutations.
NTU Singapore

The VaNGuard test relies on a reaction mix containing enAsCas12a, a variant of the enzyme Cas12a that acts like a pair of "molecular scissors."

The enzyme enAsCas12a is “programmed” to target specific segments of the SARS-CoV-2 genetic material and to snip them off from the rest of its viral genome. Successfully snipping off segments is how the enzyme “detects” the presence of the virus. The programming is done by two different molecules known as guide RNAs, which are designed to recognize specific sites on the SARS-CoV-2 genome.

The scientists decided to use two guide RNAs that recognize sequences that are extremely similar between variants of SARS-CoV-2 and that are also unique to the virus. Each guide RNA is computationally predicted to recognize over 99.5 percent of the thousands of SARS-CoV-2 isolates that have so far been sequenced around the world.

Tan explained: “Combining two or more guide RNAs with the enzyme enAsCas12a ensures that if one of the guide RNAs fails to guide it to the correct segment of the virus because of a mutation, the other guide RNA can still 'rescue' this mismatch.”

So far, the made-in-NTU diagnostic platform can recognize up to two mutations within the target sites on the SARS-CoV-2 genome.

When the SARS-CoV-2 virus or one of its variants is detected in a sample, the engineered Cas12 enzyme variant enAsCas12a becomes hyperactivated and starts cutting other detectable genetic material in the sample as well, including a molecule tagged with a fluorescent dye that is added to the reaction mix.

When the molecule is cut, it starts to glow. This glow is picked up by a microplate reader, a lab instrument that can detect and quantify the light photons emitted by the molecule.

Tan, who is also from the Genome Institute of Singapore at the Agency for Science, Technology and Research, Singapore (A*STAR), explained: “If the virus is present, the molecule will glow. If not, it means the virus is not present to cause the hyperactivation of the molecular scissors.”

Making the VaNGuard test easy to use 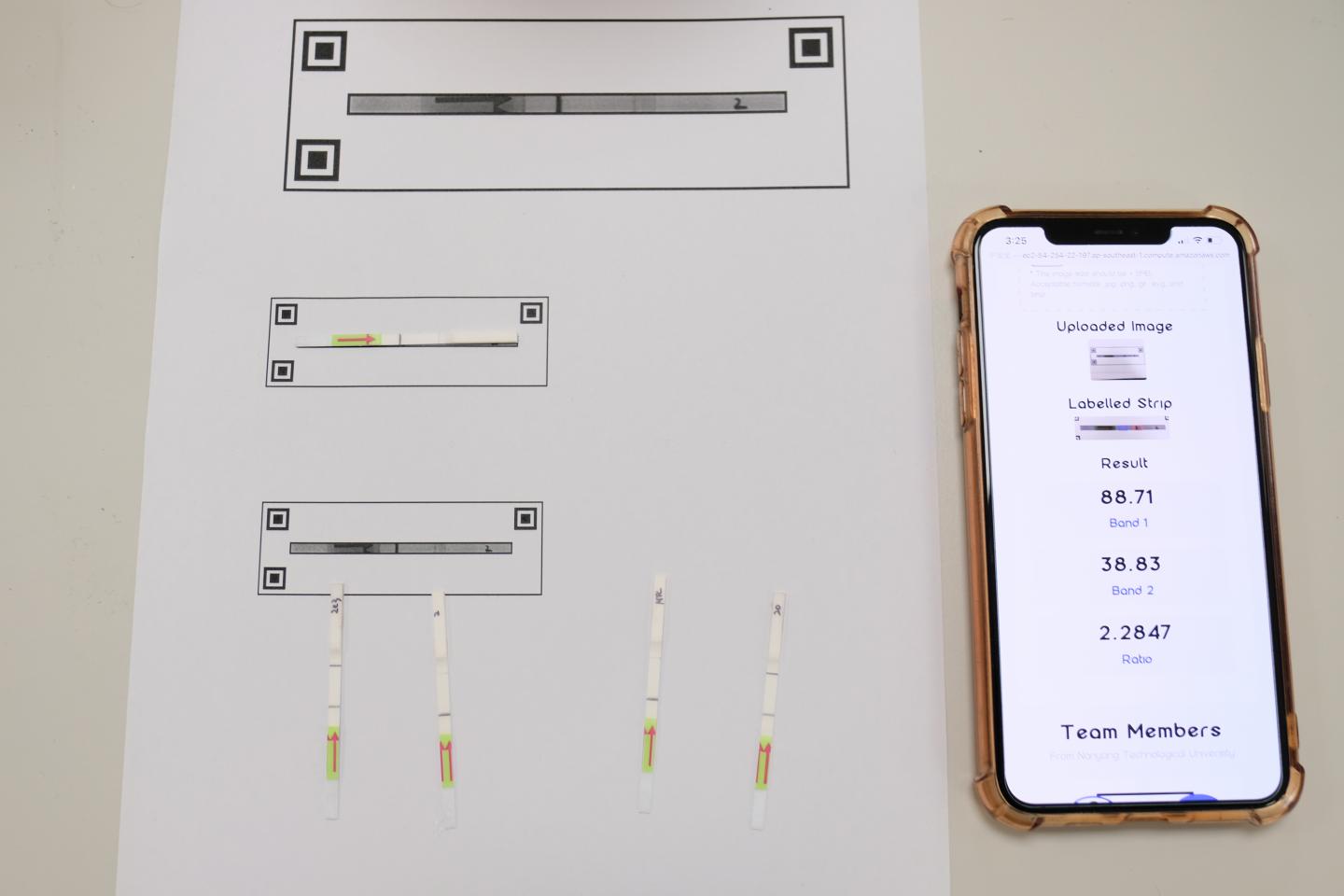 To make the test easier to use once it has been approved for roll out, the scientists integrated the test into a specially treated paper strip, and developed a mobile phone app to facilitate the interpretation of the paper strips.
NTU Singapore

To make the test easier to use once it has been approved for roll out, the scientists integrated the test into a specially treated paper strip that looks similar to a pregnancy test.

The paper strip is dipped into a tube containing the crude nasopharyngeal sample and the reaction mix. In the presence of a SARS-CoV-2 virus or its variant, two strong bands will appear on the paper strip. In the absence of the virus, only one band will appear.

They added different amounts of the synthesized sample to their test and observed two strong bands when the paper strip was dipped into each reaction mix. This indicates that the VaNGuard test is robust against mutated viral sequences. The scientists also developed a mobile phone app to facilitate the interpretation of the paper strips.

The VaNGuard test was developed by scientists from NTU’s School of Chemical and Biomedical Engineering, School of Biological Sciences, and School of Computer Science and Engineering; National University Health System; and A*STAR.

- This press release was originally published on the Nanyang Technological University, Singapore website