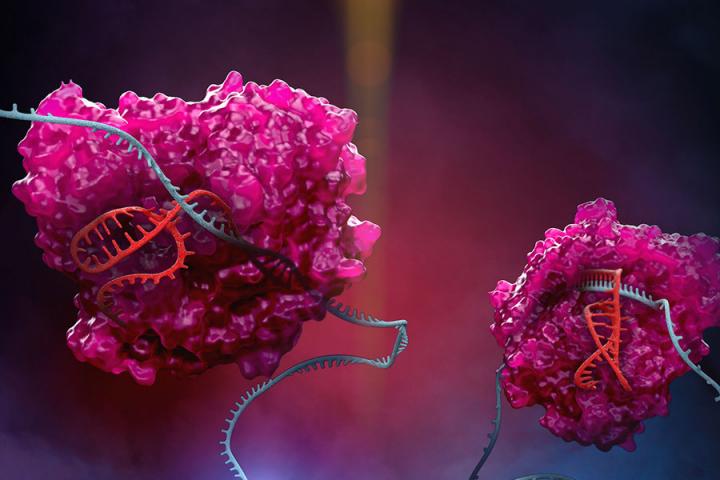 The CRISPR family enzyme Cas13 at work. Cas13 (pink), is at the heart of the RESCUE platform, where it uses a special guide (red) to target RNAs in the cell (blue).
Credit: Image: Stephen Dixon

CRISPR-based tools have revolutionized our ability to target disease-linked genetic mutations. CRISPR technology comprises a growing family of tools that can manipulate genes and their expression, including by targeting DNA with the enzymes Cas9 and Cas12 and targeting RNA with the enzyme Cas13. This collection offers different strategies for tackling mutations. Targeting disease-linked mutations in RNA, which is relatively short-lived, would avoid making permanent changes to the genome. In addition, some cell types, such as neurons, are difficult to edit using CRISPR/Cas9-mediated editing, and new strategies are needed to treat devastating diseases that affect the brain.

McGovern Institute Investigator and Broad Institute of MIT and Harvard core member Feng Zhang and his team have now developed one such strategy, called RESCUE (RNA Editing for Specific C to U Exchange), described in the journal Science.

Zhang and his team, including first co-authors Omar Abudayyeh and Jonathan Gootenberg (both now McGovern fellows), made use of a deactivated Cas13 to guide RESCUE to targeted cytosine bases on RNA transcripts, and used a novel, evolved, programmable enzyme to convert unwanted cytosine into uridine—thereby directing a change in the RNA instructions. RESCUE builds on REPAIR, a technology developed by Zhang's team that changes adenine bases into inosine in RNA.

RESCUE significantly expands the landscape that CRISPR tools can target to include modifiable positions in proteins, such as phosphorylation sites. Such sites act as on/off switches for protein activity and are notably found in signaling molecules and cancer-linked pathways.

"To treat the diversity of genetic changes that cause disease, we need an array of precise technologies to choose from. By developing this new enzyme and combining it with the programmability and precision of CRISPR, we were able to fill a critical gap in the toolbox," says Zhang, the James and Patricia Poitras Professor of Neuroscience at MIT. Zhang has appointments in MIT's departments of Brain and Cognitive Sciences and Biological Engineering.

Expanding the reach of RNA editing to new targets

The previously developed REPAIR platform used the RNA-targeting CRISPR/Cas13 to direct the active domain of an RNA editor, ADAR2, to specific RNA transcripts where it could convert the nucleotide base adenine to inosine, or letters A to I. Zhang and colleagues took the REPAIR fusion and evolved it in the lab until it could change cytosine to uridine, or C to U.

RESCUE can be guided to any RNA of choice, then perform a C-to-U edit through the evolved ADAR2 component of the platform. The team took the new platform into human cells, showing that they could target natural RNAs in the cell, as well as 24 clinically relevant mutations in synthetic RNAs. They then further optimized RESCUE to reduce off-target editing, while minimally disrupting on-target editing.

Expanded targeting by RESCUE means that sites regulating activity and function of many proteins through post-translational modifications, such as phosphorylation, glycosylation, and methylation, can now be more readily targeted for editing.

A major advantage of RNA editing is its reversibility, in contrast to changes made at the DNA level, which are permanent. Thus, RESCUE could be deployed transiently in situations where a modification may be desirable temporarily, but not permanently. To demonstrate this, the team showed that in human cells, RESCUE can target specific sites in the RNA encoding β-catenin, that are known to be phosphorylated on the protein product, leading to a temporary increase in β-catenin activation and cell growth. If such a change were made permanent, it could predispose cells to uncontrolled cell growth and cancer, but by using RESCUE, transient cell growth could potentially stimulate wound healing in response to acute injuries.

The researchers also targeted a pathogenic gene variant, APOE4. The APOE4 allele has consistently emerged as a genetic risk factor for the development of late-onset Alzheimer's disease. Isoform APOE4 differs from APOE2, which is not a risk factor, by just two differences (both C in APOE4 versus U in APOE2). Zhang and colleagues introduced the risk-associated APOE4 RNA into cells and showed that RESCUE can convert its signature Cs to an APOE2 sequence, essentially converting a risk to a non-risk variant.

To facilitate additional work that will push RESCUE toward the clinic, as well as enable researchers to use RESCUE as a tool to better understand disease-causing mutations, the Zhang lab plans to share the RESCUE system broadly, as they have with previously developed CRISPR tools. The technology will be freely available for academic research through the nonprofit plasmid repository Addgene.

Additional information can be found on the Zhang lab's webpage.

Discovery Broadens Scope of Use of CRISPR Gene Editing

Discovery Broadens Scope of Use of CRISPR Gene Editing