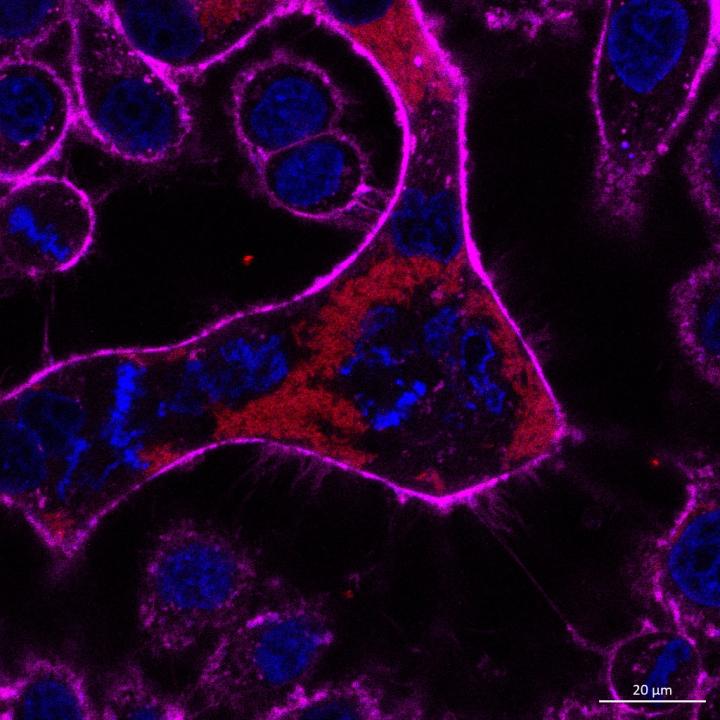 Burkholderia pseudomallei is a bacterium in the soil that causes melioidosis, a tropical disease with high morbidity and mortality. Recently, researchers at the National University of Singapore (NUS) Yong Loo Lin School of Medicine discovered that Burkholderia infection sets off a series of events that provoke the host's immune system and cause the infected cells to self-destruct. The work was published on Jun. 22 in the journal Proceedings of the National Academy of Sciences USA.

When Burkholderia pseudomallei infects cells, it can cause the infected cells to fuse with other cells around them, forming giant cells with many nuclei. Dr. Joanne Wei-Kay Ku and associate professor Gan Yunn Hwen, both from the Department of Biochemistry and the NUSMed Infectious Disease Programme, as well as their co-authors, found that this cell fusion event stimulated the type 1 interferon (IFN) signaling pathway, which modulates the immune system to fight against invading pathogens such as bacteria and viruses.

Interestingly, the act of the cells fusing, rather than the bacterial infection, was the trigger to the immune system because the type 1 IFN signaling pathway was also stimulated when cell fusion was induced by the addition of a chemical. The researchers found that the giant cells did not behave like normal cells. Firstly, they started to divide but could not complete the process. Secondly, the DNA in the giant cells was damaged, making it more unstable (prone to changes such as mutations). These are ripe conditions for the cells to transform into cancer cells. 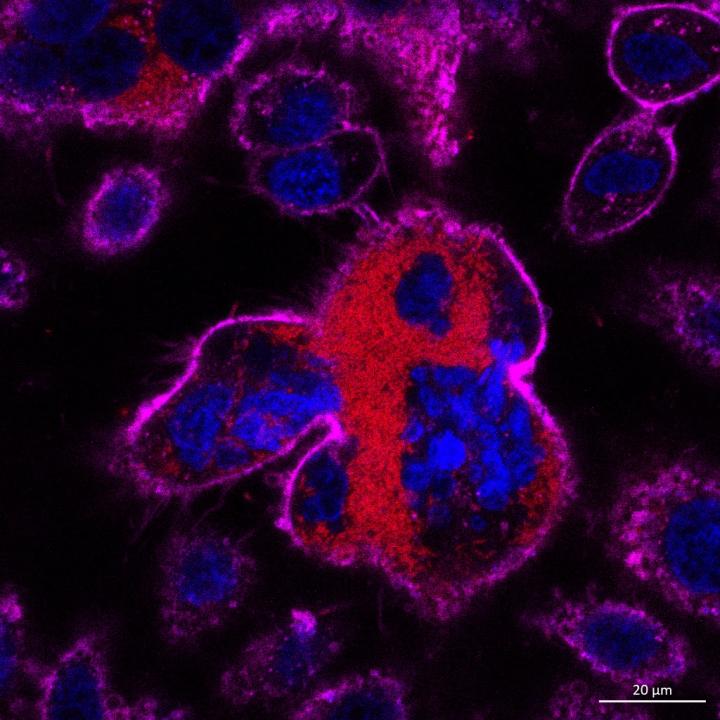 Part 2: The cell membrane of the giant cell starts to constrict, similar to the cytokinesis stage of cell division (division of the cytoplasm into daughter cells).
Dr Gan Yunn Hwen

One of the hallmarks of damaged, unstable DNA is the presence of micronuclei, which form when bits of DNA fail to segregate properly during cell division. When these micronuclei rupture (which they are prone to do), the DNA is made accessible to factors in the cytosol. Gan and team observed micronuclei in the giant cells and a corresponding activation of the cGAS-STING pathway of the immune system, which senses the out-of-place DNA and is known to lead to type 1 IFN signaling.

However, under the onslaught of extensive cell fusion, the activated cGAS-STING pathway turns on an unusual death program known as autophagy instead of producing type 1 IFN. This causes these abnormal giant cells to self-destruct. Since unnatural cell fusion is often accompanied with DNA damage and instability, the killing mechanism could be a powerful way to destroy cells before they become cancerous.

The ability of our immune system to "sense" different forms of danger such as viral or bacterial invaders is well known. However, it took an unusual pathogen like Burkholderia bacteria for researchers to discover that abnormal cell fusion is a novel danger signal sensed by the immune system. These findings add to our understanding of how the immune system prevents abnormally fused cells, whether as a result of infections or through exposure to chemicals, from turning into cancer cells.

Gan further explained the importance of knowing your enemy, "Our microbial adversaries are often our best teachers. Learning how to cure and control infections are critically important. However, understanding the interactions between pathogen and host is equally important, because it allows us to discover what our immune system is capable or incapable of, and these fundamental discoveries can give us new perspectives in maintaining health and treating disease."

How to Diagnose Mosquito-Borne Diseases

How to Diagnose Mosquito-Borne Diseases