Epigenetic changes in the islets of Langerhans of the pancreas can be detected in patients several years before the diagnosis of type 2 diabetes (T2D). These changes are responsible for the altered methylation activity of specific genes which differs from that in healthy individuals. In humans, 105 such changes have been discovered in blood cells. This was shown in a study by researchers from the DZD/DIfE (German Center for Diabetes Research/German Institute of Human Nutrition), which has now been published in the journal Diabetes. These findings could help to develop diagnostic markers for type 2 diabetes.

Several causes play a role in the development of type 2 diabetes. These include a genetic predisposition, epigenetic factors as well as a diet high in fat and sugar, overweight, and lack of exercise. In order to prevent the development of the metabolic disease, it is important to identify people with an increased risk for the metabolic disease at an early stage. Since the development of diabetes can also lead to functional disorders in the islets of Langerhans in the pancreas, researchers from the German Institute of Human Nutrition (DIfE) and the German Center for Diabetes Research (DZD) have investigated whether there are epigenetic changes in the islets of Langerhans that are related to the development of diabetes. Lund University also participated in the study. 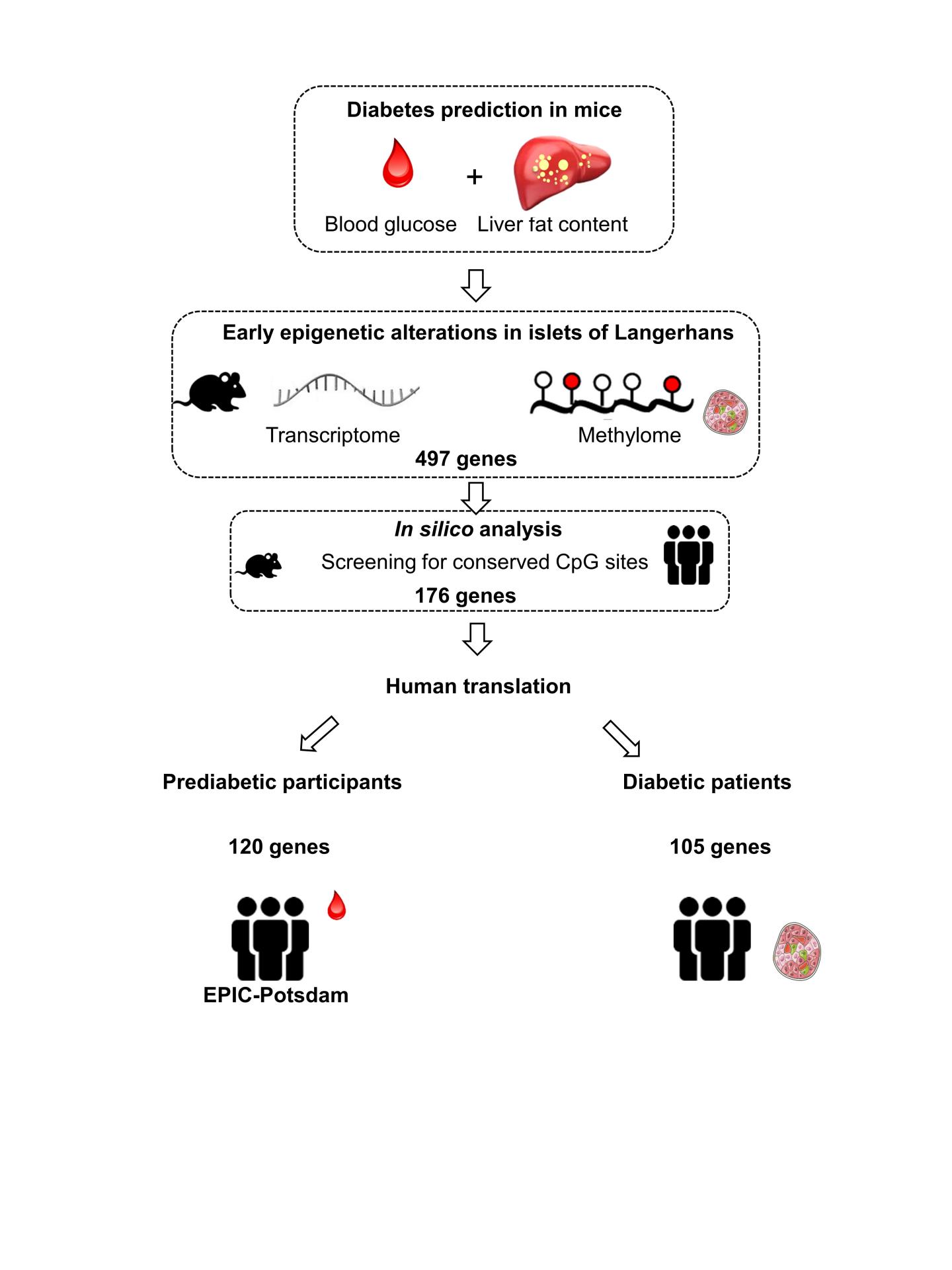 The researchers first identified early changes in DNA methylations and the expression patterns in the islets of Langerhans in diabetes-prone mice and then investigated which of these could be identified in humans before diabetes was diagnosed.
DIfE

"Our aim was to identify early changes in DNA methylation and the expression pattern in the islets of Langerhans in a diabetes-prone mouse and then to test which of these can also be detected in the blood of humans before diabetes is diagnosed," said professor Dr. Annette Schürmann, spokesperson of the DZD and head of the Department of Experimental Diabetology at DIfE, explaining the translational research approach. For this purpose, obese mice were fed a high-calorie diet for five weeks and divided into diabetes-prone and diabetes-resistant animals on the basis of certain criteria (e.g. the liver fat content). The DNA methylations and expression patterns in the islets of Langerhans were determined for both groups. "We were able to identify 497 candidates which differed both in terms of their expression and their DNA methylation," said first author Dr. Meriem Ouni.

The next step was to search for similar epigenetic changes in blood cells of participants in the EPIC-Potsdam study (270 controls and 270 incident T2D cases on average 3.8 years before diagnosis). The researchers found altered levels of DNA methylation in 105 genes that were associated with the later diagnosis of diabetes. Most of these changes were also found in the islets of Langerhans in type 2 diabetes patients. The researchers assume that most of the alterations in DNA methylation that can be detected in the blood before diagnosis are still present in the islets of Langerhans later in the course of the disease.

"Our broad and translational research approach has identified a number of interesting genes whose expression and altered DNA methylation are associated with the later diagnosis of diabetes," said Schürmann. "In humans, 105 such differences can be detected in blood cells a few years prior to the diabetes diagnosis. This may open up the possibility of using some of these changes as diagnostic markers for type 2 diabetes in the future. "

Next, the researchers want to investigate whether diets or certain drugs can correct unfavorable DNA methylation patterns. They also want to determine whether the identified markers differ in the various diabetes clusters.

- This press release was originally published on the DZD website