Most conventional molecular diagnostics usually detect only a single disease-related biomarker. Great examples are the PCR tests currently used to diagnose COVID-19 by detecting a specific sequence from SARS-CoV-2. Such so-called single-plex methods provide reliable results because they are "calibrated" to a single biomarker. However, determining whether a patient is infected with a new SARS-CoV-2 variant or a completely different pathogen requires probing for many different biomarkers at one time.

Scientists from the Helmholtz Institute for RNA-based Infection Research (HIRI) and the Julius Maximilians University (JMU) in Würzburg have now paved the way for a completely new diagnostic platform with LEOPARD. It is a CRISPR-based method that is highly multiplexable, with the potential to detect a variety of disease-related biomarkers in just one test.

LEOPARD, which stands for "Leveraging Engineered tracrRNAs and On-target DNAs for PArallel RNA Detection," is based on the finding that DNA cutting by Cas9 could be linked to the presence of a specific ribonucleic acid (RNA). This link allows LEOPARD to detect many RNAs at once, opening up opportunities for the simultaneous detection of RNAs from viruses and other pathogens in a patient sample.

The study published today in Science was initiated by Chase Beisel, professor at JMU and research group leader at HIRI, and professor Cynthia Sharma from JMU's Institute of Molecular Infection Biology (IMIB). "With LEOPARD, we succeeded in detecting RNA fragments from nine different viruses,” says Beisel. "We were also able to differentiate SARS-CoV-2 and one of its variants in a patient sample while confirming that each sample was correctly collected from the patient." 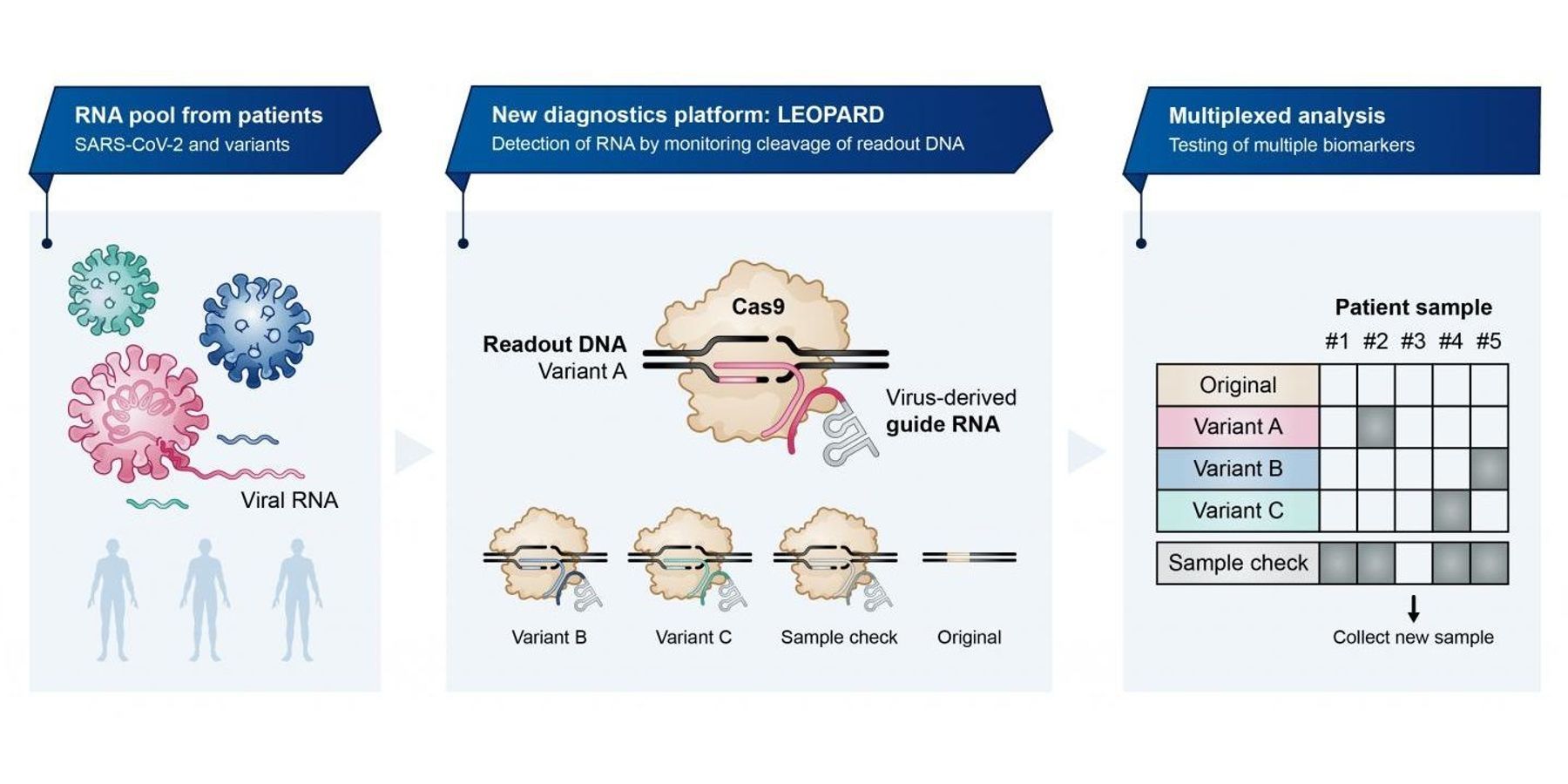 The novel platform LEOPARD has the potential to detect a variety of disease-related biomarkers in just one test.
Sandy Westermann / HIRI

CRISPR-Cas9 is principally known as a biomolecular tool for genome editing. Here, CRISPR-Cas9 function as molecular scissors that cut specific DNA sequences. These same scissors are naturally used by bacteria to cut DNA associated with invading viruses. Whether editing genomes or eliminating viruses, Cas9 cutting is directed by guide RNAs. The guide RNAs found in bacteria must pair with a separate RNA called the tracrRNA. The RNA couple then can work with Cas9 to direct DNA cutting.

The tracrRNA was thought to only pair with guide RNAs coming from the antiviral system. However, the Würzburg scientists discovered that the tracrRNA was pairing with other RNAs, turning them into guide RNAs. Cynthia Sharma, Chair of Molecular Infection Biology II at the IMIB and spokesperson of the Research Center for Infection Diseases (ZINF) at JMU was astounded by this discovery: "When we searched for RNAs binding to Cas9 in our model organism Campylobacter, we surprisingly found that we detected not only guide RNAs, but also other RNA fragments in the cell that looked like guide RNAs. The tracrRNA was pairing with these RNAs, resulting in ‘non-canonical’ guide RNAs that could direct DNA cutting by Cas9."

The LEOPARD diagnostic platform builds on this discovery. "We figured out how to reprogram the tracrRNAs to decide which RNAs become guide RNAs," says Beisel. "By monitoring a set of matching DNAs, we can determine which RNAs were present in a sample based on which DNAs get cut. As part of the ongoing pandemic, LEOPARD could allow a doctor to figure out whether the patient is infected with SARS-CoV-2, if it's a unique variant, and whether the sample was correctly taken or needs to be repeated—all in one test."

In the future, LEOPARD's performance could dwarf even multiplexed PCR tests and other methods. "The technology has the potential to revolutionize medical diagnostics not only for infectious diseases and antibiotic resistances, but also for cancer and rare genetic diseases," says Oliver Kurzai, director of JMU's Institute of Hygiene and Microbiology, which provided patient samples for the study.

"The work highlights the excellent collaborative and interdisciplinary research taking place here in Würzburg," says Jörg Vogel, director of IMIB and HIRI, a joint facility of JMU with the Helmholtz Center for Infection Research in Braunschweig. "LEOPARD impressively demonstrates that we can cover the full spectrum of complementary cutting-edge research in Würzburg, from the fundamentals of RNA research to clinical applications."