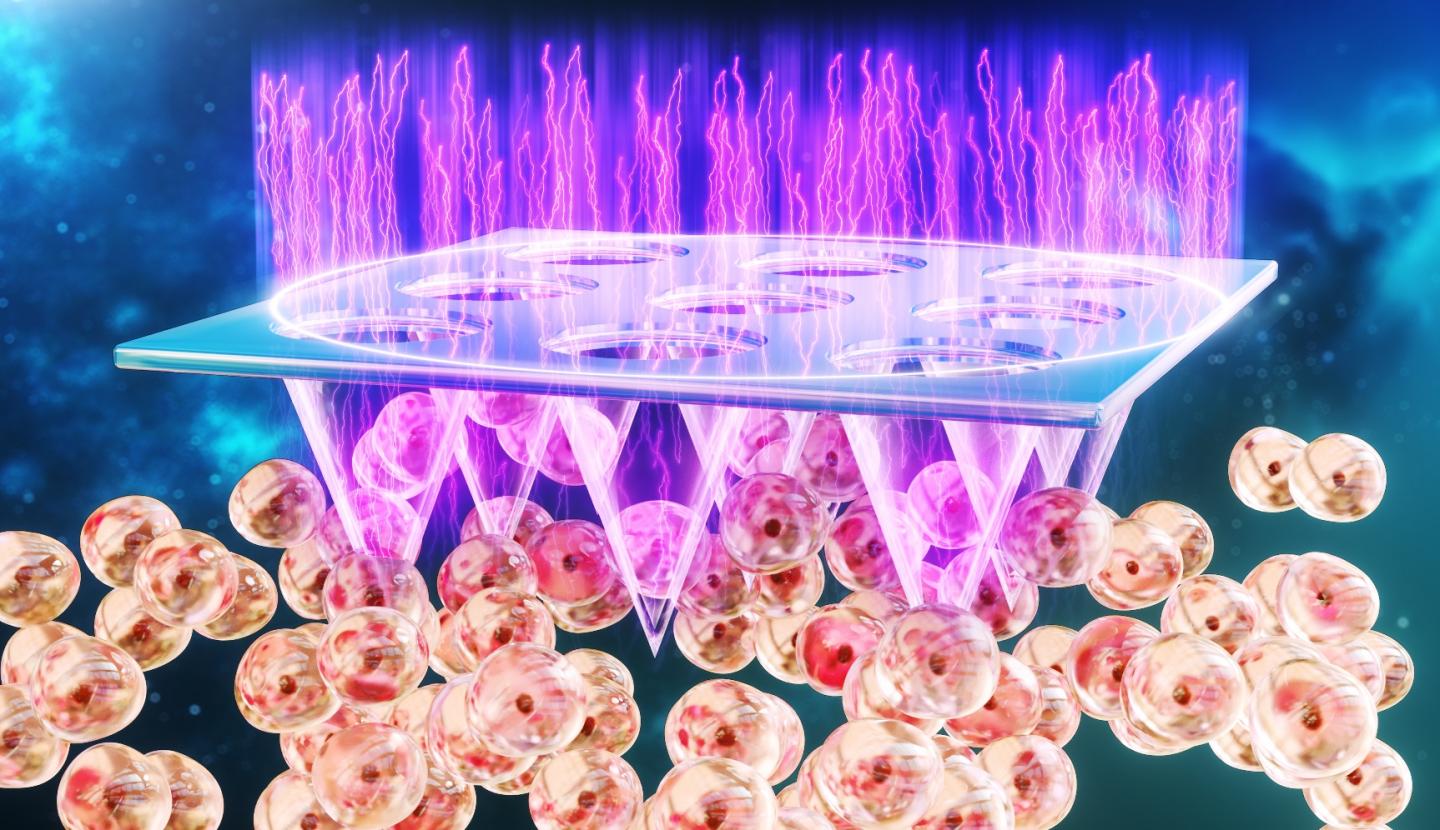 LOS ANGELES, CA — An interdisciplinary team of researchers at the UCLA Jonsson Comprehensive Cancer Center has developed a medicated patch that can deliver immune checkpoint inhibitors and cold plasma directly to tumors to help boost the immune response and kill cancer cells.

The thumb-sized patch has more than 200 hollow microneedles that can penetrate the skin and enter the tumor tissue. The cold plasma is delivered through the hollow structure, destroying cancer cells, which facilitates the release of tumor-specific antigens and boosts an immune response. The immune checkpoint inhibitors—antibodies that block checkpoint proteins, which interferes with immune system function and prevents the immune system from destroying cancer cells—are also released from the sheath of microneedles to boost the T cell-mediated anti-cancer effects.

In the study, which is published in the Proceedings of the National Academy of Sciences, the UCLA researchers found that delivering the two therapies to mice with melanoma using the patch enabled the immune system to better attack the cancer, significantly inhibiting the growth of the tumor and prolonging the survival of the mice.

"Immunotherapy is one of the most groundbreaking advances in cancer treatment," said study senior author Zhen Gu, professor of bioengineering at the UCLA Samueli School of Engineering and member of the Jonsson Cancer Center. "Our lab has been working on engineering new ways to apply or deliver drugs to the diseased site that could help improve the effectiveness of cancer immunotherapy, and we found the patch to be a quite promising delivery system."

The study is also the first to demonstrate that cold plasma can be effective in synergizing cancer immunotherapy. Plasma, which is usually hot, is an ionized gas that comprises more than 99% of the universe. Here, cold plasma is generated by a small device operating at atmospheric pressure and room temperature. Therefore, cold plasma can be applied directly to the body—internally or externally.

"This study represents an important milestone for the field of plasma medicine," said co-senior author Richard Wirz, professor of mechanical and aerospace engineering at UCLA Samueli. "It demonstrates that the microneedle patch can realize the plasma delivery while also working with the drug to improve the effectiveness of cancer therapy."

"Plasma can generate reactive oxygen species and reactive nitrogen species, which are a group of chemical species that can destroy cancer cells," said Guojun Chen, who is the co-first author of the study and a postdoctoral fellow in Gu's laboratory.

"Those cancers can then release tumor-associated antigens, which can enhance immune response to kill cancers," said Zhitong Chen, who is the other co-first author and a postdoctoral fellow in Wirz's lab.

The team tested the cold plasma patch on mice with melanoma tumors. The mice that received the treatment showed an increased level of dendritic cells, which are a specific type of white blood cells that alert the immune system of a foreign invader and initiate a T cell-mediated immune response.

The group of mice also showed delayed tumor growth compared to the untreated group and 57 percent were still alive at 60 days, while mice in other control groups had all died.

"This treatment strategy can potentially go beyond cancer immunotherapy," said Gu, who is also a member of the California NanoSystems Institute at UCLA. "Integrated with other treatments, this minimally invasive method can be extended to treat different cancer types and a variety of diseases."

The patch will have to go through further testing and approvals before it could be used in humans. But the team members believe the approach holds great promise.

What Factors Affect Outcomes in Kidney Cancer Treated with Immunotherapy?

What Factors Affect Outcomes in Kidney Cancer Treated with Immunotherapy?

Study Identifies Biomarker That May Help Predict Benefits of Immunotherapy

Study Identifies Biomarker That May Help Predict Benefits of Immunotherapy

BCMA-Targeted Immunotherapy Can Lead to Durable Responses in Multiple Myeloma

BCMA-Targeted Immunotherapy Can Lead to Durable Responses in Multiple Myeloma