Erica Tennenhouse, PhD, was the managing editor of Today's Clinical Lab (formerly Clinical Lab Manager) from 2018 to 2022. Erica is a freelance writer and has written for National...

Antibody tests are being hailed as key to understanding the spread of coronavirus, identifying individuals with immunity to the virus, and reopening the economy. Over the past few weeks, several antibody tests have been made available to labs in the US.

As executive vice president and president of the clinical diagnostics group, Wright runs group operations for Bio-Rad in the US and Europe, including product development, marketing, and program management. She has over two decades of experience in biotechnology, in both research and clinical sectors.

Q: What can SARS-CoV-2 serology testing reveal in comparison with molecular testing?

A: Molecular testing is used to diagnose an active infection. If someone presents with all the symptoms that are associated with coronavirus, have an active high fever, etc., they’ll receive a nasopharyngeal swab with the goal of collecting a virus particle on that swab. You’re actually detecting the pathogen in that test and hopefully they’ll get a conclusive result one way or the other that indicates whether they’ve got a viral infection.

With serology testing, you’re detecting whether or not somebody has been previously infected and they may or may not have known. So, if you do get a positive test by molecular and if you were to draw the person’s blood eight days later, you’re going to see an antibody or immune response. But there’s a lot of data coming out of especially high-density populations like New York that are indicating a pretty high asymptomatic rate—people who were infected with SARS-CoV-2 but never had symptoms and never got a conclusive diagnosis of the virus itself. In that case, really the only option to understand whether they’ve been exposed and whether they could have immunity is to do the blood draw and look for the antibodies themselves, so that’s the most compelling use case. The other thing is the time course—with the viral test, you have to be sampling one to four days post-infection. After that, because of the way that the disease manifests, your risk of false negatives with the molecular test gets even higher. The serology test just casts a bigger net to try and get a sense of who’s been exposed.

Q: Can you tell me about Bio-Rad’s new antibody test and what differentiates it from other antibody tests on the market? 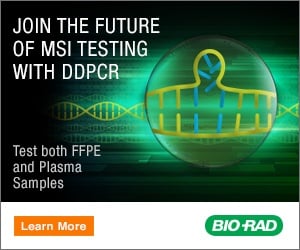 A: There’s been a lot of information in the popular press about antibody tests over the last few weeks. I think that they hold great promise but there are some subtle differences among the formats. Our product is meant to be run in a laboratory, so it is not a point-of-care test. It’s a format known as an ELISA, so it’s a plate-based kit that’s run in a central laboratory. You take a blood draw from somebody who you want to determine whether or not they’ve had prior exposure to the virus and have mounted an immune response, i.e., whether they have developed antibodies against the virus. What we’re detecting with the kit are those antibodies.

There are different types of antibodies that develop at different time points subsequent to infection. Those are known as immunoglobulins which is just another fancy name for antibody. The first type of immunoglobulin that emerges after infection is known as an IgM antibody, which is followed by IgG, and then there are other types of antibodies that are useful in fighting localized infection, one example of which is IgA. What’s different with our kit is that we detect all of those immunoglobulin types, whereas many of the automated serology assays that you’re seeing on the market only detect IgG and what that means is that they will detect later on in infection. We get 100 percent sensitivity by around eight days after infection, so we can see antibodies 100 percent of the time in those patients, whereas with IgG alone, it’s going to be more like 14 days. The sensitivity is a key differentiator.

Q: What about the test's specificity?

A: The story I just told around being about to detect antibodies over a certain time course—that’s sensitivity. Specificity is where you need to make sure that your kit only detects antibodies that are very specific to the SARS-CoV-2 virus and that they don’t cross-react or interact with other interfering substances such as other antibodies, or if you’ve had exposure to other flu viruses and other coronaviruses and have an immune response in your system. Our specificity is incredibly high. If you have a test that has lower specificity, you run the risk of false positives because you’re saying that you’re detecting an antibody but it might not be specific to SARS-CoV-2, so we’ve taken great pains to ensure that our test is highly specific to the antibodies against the SARS-CoV-2 virus.

Q: What is the throughput like for Bio-Rad's antibody test?

A: The throughput is very scalable. The tests are run in a plate, and each plate is 96 tests but you can scale and run a number of plates at once. We have an instrument that can be used to automate the workflow, which consists of handling different liquids—you’re basically pipetting different liquids and washing the plate and reading the signal. With one of our automated Evolis systems, it can do about 60 tests per hour. That’s slightly lower throughput than some of the large closed systems. For example, Abbott or Roche systems are going to be probably double that—a couple of hundred tests an hour—but they’re closed systems. Our system is open, so in addition to using it on our plate handling system, it can be used on any plate handling system that’s not Bio-Rad’s, and there are tens of thousands of those, it’s a really common piece of laboratory equipment. You can buy multiple systems and scale throughput, or labs can adapt equipment that they already have in their lab environments and increase the throughput significantly that way. It offers them a lot of flexibility that way to use the equipment they already have. They don’t need to buy Bio-Rad-specific equipment. If they’ve got plate-handling ELISA equipment, it can be adapted to this standard ELISA kit. It’s not one of the closed systems where you can only buy proprietary reagents and match them up with that proprietary platform, so there’s a bit more flexibility.

Q: How much antibody testing is currently being done in the US? How much needs to be done?

A: This is the million-dollar question. It’s really a bit soon because the laboratories are still validating tests and building capacity. Reports indicate that Quest and LabCorp are each building capacity to be able to run up to 200,000 serology tests per day. So that gives you a reference for some of the large laboratory systems of what they’re looking to be able to scale from a processing perspective.

Many test manufacturers, ourselves included, have publicly discussed our intention to ramp up to producing millions of tests per week, so there will be hopefully lots of product on the market. And I think the use case is really still emerging as well. Most experts believe that the first place where these seroprevalence studies will be used is on frontline workers—folks that are working in health care and other more highly exposed situations as well as in some back to work campaigns. But I think the jury is still out on how broadly the population will be screened and how that will unfold and be used in aiding the reopening of the economy.

Q: If a patient receives a positive result on an antibody test, how should that be interpreted?

A: All it means at this point, until we have more evidence around immunity, is that they have mounted an immune response to the virus and most likely have effectively cleared infection. What we don’t know is how long that immunity lasts. It’s similar to influenza; we get a flu shot every year because the virus mutates and also the immune response isn’t 100 percent protective forever, unlike some vaccines that we get where you get lifelong protection. A lot of the research going on right now is trying to understand immunity and how the level of an antibody response, or the titer—how much antibody you may have developed—correlates to immunity. This will be a very active area of study over the next several months, particularly as some of these early vaccine trials start.

Finding the Next COVID-19 Variant

Finding the Next COVID-19 Variant